Many of us saw this large and strong company failing and crashing but most of us is asking ourselves, is this the end of TEVA or is there till hope. When will it recover?

The bottom line of this analysis is that TEVA will not recover to a state of multiplying or tripling it's current price. Price may go sideways or even to a moderate uptrend for a year or two but not higher than that.

For this example I used my long term model (which I call simply LONG), which reveals cycles that are much longer that the annual cycle. The annual cycle which is part of the 5_Layer model is intended to reveal cycles which are between a year and two. In this case I wanted to see much longer cycles, such as 2-5 years ahead.

There is a need for at least 8 years of price history, which I downloaded from Yahoo Finance.

When running this algorithm from 2015 (LBC at 2015, right side is not included in the calculation) we can clearly see the forthcoming change in direction at 2016, down until 2018. 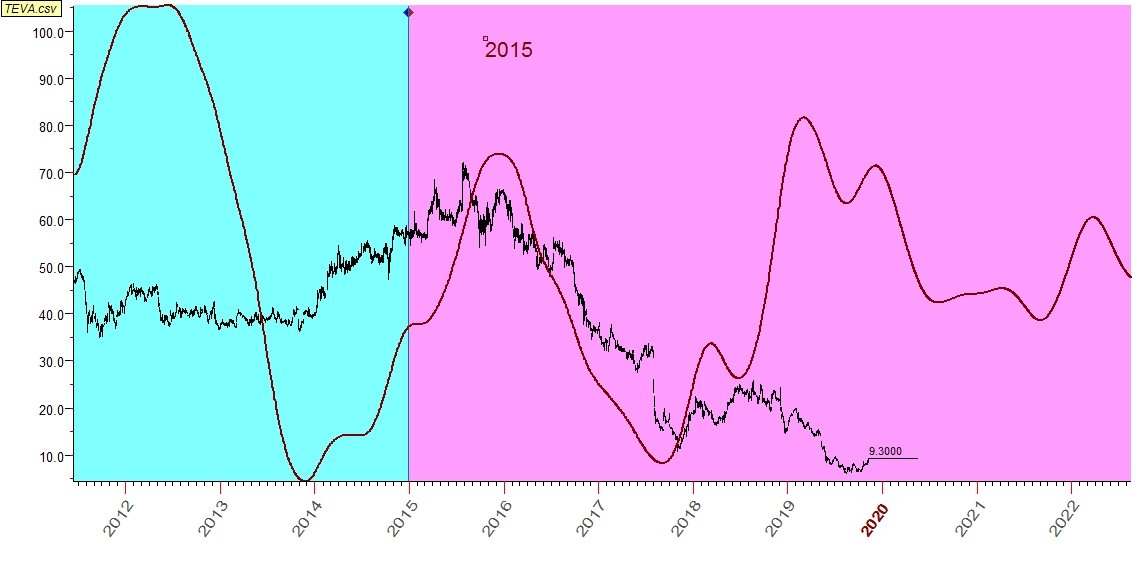 I will now change the start (LBC) to 2017 and run the algorithm again, leaving the 2015 line in place for comparison.

The 2017 line is very close to the 2015 line, which indicates that this model is consistent in time.  The small differences between the lines are due to the additional 2 years of price information added between 2015 and 2017.

Both lines show a continuation of the downtrend towards 2018, then a recovery towards 2019 and then a downtrend again. 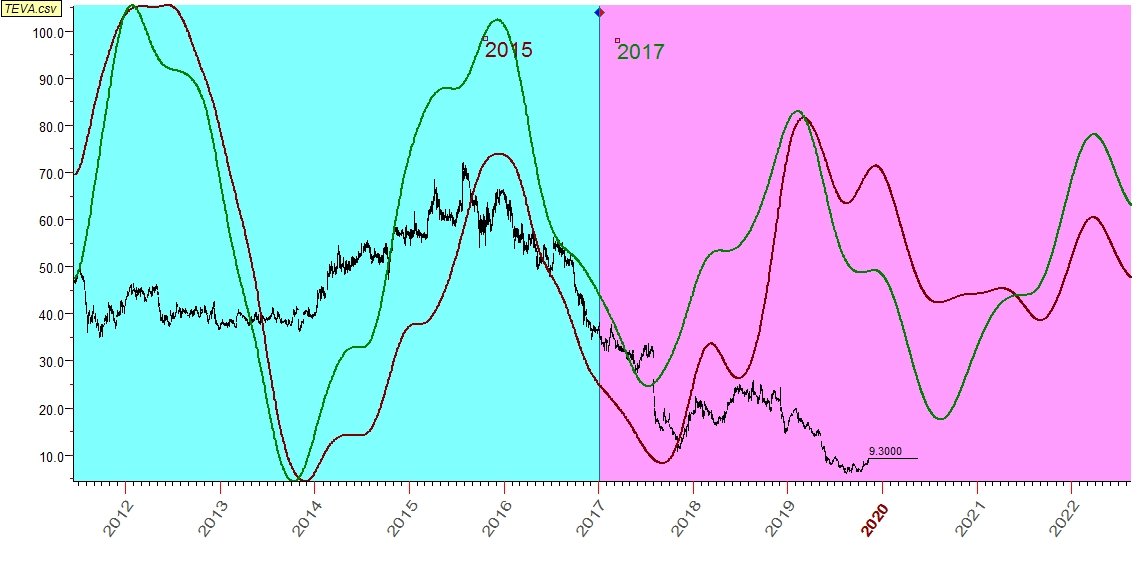 The 2019 line is very close to the 2015 and 2017 lines, which indicates that this model is still consistent in time.  The small differences are due to the additional 2 years of price information added between 2017 and 2019.

All 3 lines show a continuation of the downtrend towards Mid-2020. The 2019 line has a more moderate slope than that of 2017, indicating that the major downtrend from 2019 is diminished (price will go downwards in a slower pace). 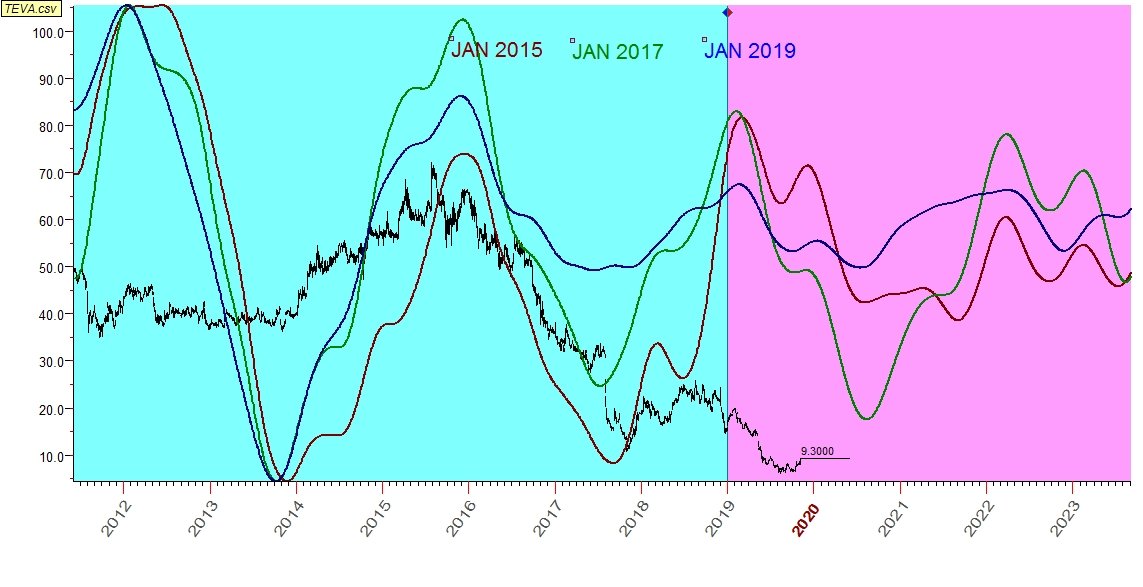 All 4 lines show a continuation of the downtrend towards Mid-2020, with sideway or small uptrend beyond that. 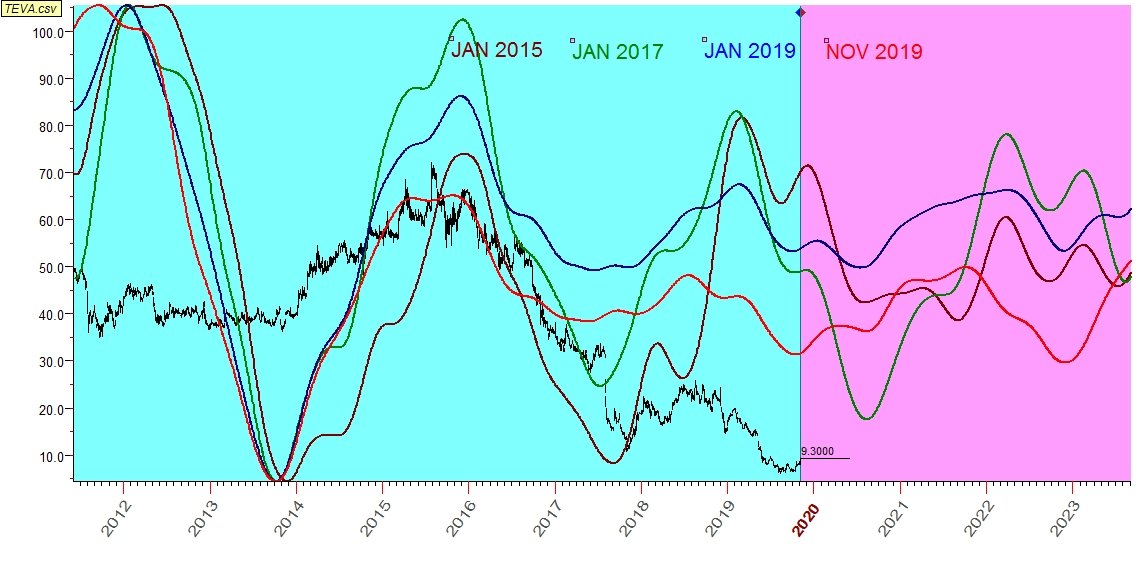 1. The LONG model is used to get a rough estimation for the price direction in the next few years. However, as we can also see in this example, it does not provide accurate timing information like the 5_Layer model provides.

2. This is not a trading advice