For the last 10 years the US economy was the powerful force behind the global economy. It was boosting up the stock-market like never before,  pushing up with it the European and Eastern markets. But on the other hand the US debt was doubled by the current administration, which was already doubled by the former administration and by the one before. It is a an exponential growth of debt, not seen in the last 90 years from the late 30' of the last century.

This situation brought a lot of wealth to a very few people, and a huge debt to many billions.

This situation is coming to and end now, as the interest rates are already very low and the QE programs have done their job in the history for the coming years. These are the last few gas drops left on the US economic engine.

The Corona Pandemic is an example how globally the markets became and how each country's economy is directly linked to others. It is also showing the that FED does not have anymore tools to help the recovery of this artificial market surge.

What now? the devaluation process is inevitable. Money will lose it's value, Gold will surge,  real-estate values will probably plunge, vast lay-offs, deep recession. Let's hope this pessimistic scenario will not happen.

However, should be prepared.

What we do at Cycles-Trader to forecast the market? we do not look on fundamentals, we do not include news, we do not rely on technical analysis. The only thing we do is to analyze the cycles that were active in the past and see which of them is still active, and affecting the market. These active cycles provide the basis of the projection lines we build for the future.

Here is an example of a forecast of the S&P500 (^GSPC), generated on early Nov 2019. 4 months later we added the price (in black). We can see very well that the annual uptrend is captured and indicated by the dark-blue line, but also the falls were very well captured by the weekly (pink) and combined model, both the small fall at end of Jan and also the bigger fall at end of Feb (Corona Effect). 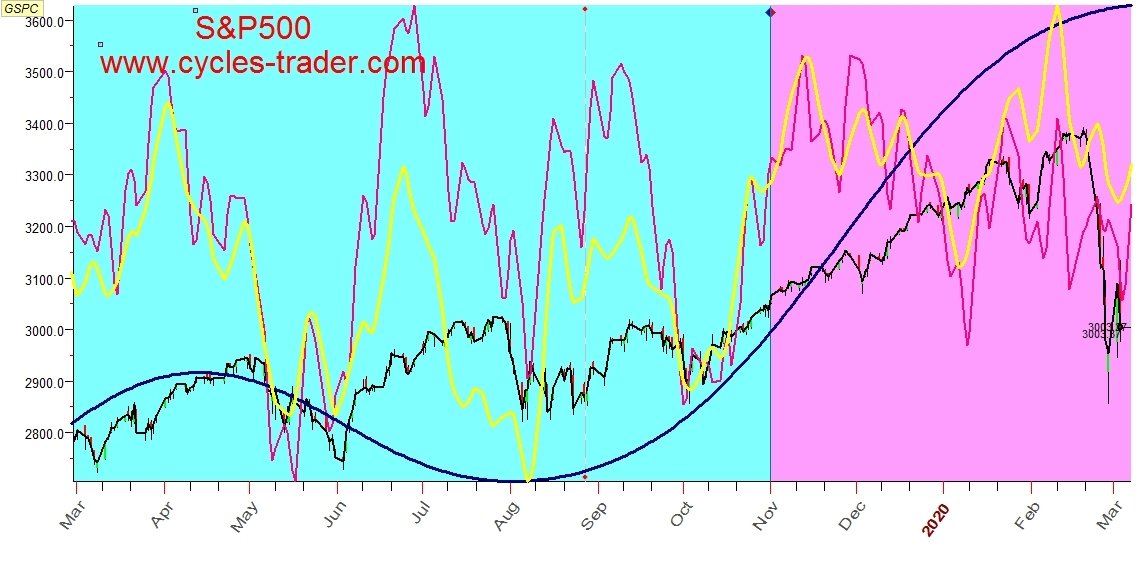 These king of forecasts are available for order.

ORDER YOUR OWN FORECAST